Writing a good story can be a daunting task – it certainly has been for me! Where to start? How to proceed? What to do with all of the ideas that come to mind, or a surprising dearth of ideas despite feeling so excited about the project at first?

Over many months of ongoing development for a story of my own, I’ve had the opportunity to navigate the muck of these early questions. I’m now in the happy position to offer advice to those who might be feeling stuck themselves, or are just beginning to think about tackling a new story. Below, I’ll offer a simple yet effective tool for beginning the long journey of bringing your narrative project to life.

Especially when first getting started on your story project, but certainly throughout, having a system for capturing ideas as they come is invaluable. I do this using sticky notes and one of the walls of my studio. I use it to get started, free up my inhibitions and internal judge, and, later, to re-inspire myself and deepen my understanding.

The materials couldn’t be much more basic. I recommend using the super sticky kind of sticky notes and posting on either a large wall or smaller adjacent walls that are cleared of all other items.

The process is simple, too. When you have an idea for the project, no matter how silly or uninspired it may seem, commit it to a sticky note, and then add the note to your wall. Collect ideas as images or text, for things like story events, background information, character appearances, snippets of dialogue, costumes or props, locales, that crazy ending you know you won’t use but need to validate yourself for by putting in writing anyway. (For the sake of creative focus, keep your idea wall specific to the project at hand. If you have another big project you’re juggling at the same time, try using a separate wall.)

Essential to the idea wall is your commitment to putting aside your internal critic. By training yourself to withhold judgement at this stage, your ideas have a chance to flow more readily. As you find yourself recording quick successions of ideas, you’ll uncover opportunities to follow seemingly innocuous thoughts down all sorts of curious and inspiring rabbit holes that you never knew existed. Down one of those holes may be something truly special that wouldn’t have surfaced if you hadn’t first allowed a string of not-so-good ideas to get some attention first.

While it’s great to use different colored sticky notes (you know, for pretty), I recommend not getting fancy with them – say, using blue notes only for ideas about your protagonist. Why? Well, what if you run out of blue notes on a really good streak about that character? What if you end up merging that protagonist with another character that previously only appeared on orange notes? My approach is to simply churn through one stack of sticky notes for all story ideas that come to me, and then move onto the next stack of a new color. I find that getting more sophisticated than that distracts me from the most essential task of recording my ideas as soon as possible and carrying on with whatever comes next.

You might find from time to time that an idea you want to record is too long for a single sticky note. It happens. What I’ve done in instances like this is to use two or three notes in a row. But for ideas that go beyond that length, I’ve generally committed them to sheets of lined paper that end up in a binder devoted to my story project. Unfortunately the closed nature of this binder means I don’t look at it often, but I do peruse it from time to time as I would my wall of ideas.

If most of the ideas you want to post are longer than a few sticky notes, it might be time to move to the next stage of development. (I may have more to share on that later.) 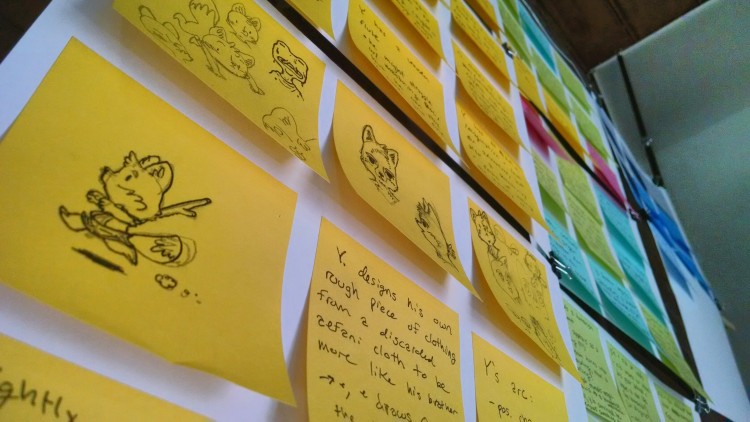 Speaking of stages, to get the most out of your idea wall, start it early in the story development process. If possible, let it be the first stage of putting pen to paper. During this time, commit to having regular sticky note sessions where the sole intention is to record and post any and all story ideas that come to mind.

But don’t leave your sticky note process behind once you’ve graduated to the next stage! It’s always a good idea to keep a stack of sticky notes on standby all throughout story development. Doing so will ensure that half-relevant ideas can exit your mind relatively quickly, allowing you to keep your focus on whatever the task at hand may be, without worry of losing a jewel of an idea to the depths of your faulty memory.

Another benefit of tending to your wall over time is that the growing mass of ideas can remind and re-inspire your future self. When you feel stuck or lost in the story development process, try returning to your collection of posted notes. They may surprise you, even occasionally delight you, in creatively stimulating ways.

Now here’s a thing. Say you’ve accumulated a large number of sticky-note ideas over a month or more. It’s fantastic to have all those ideas, but the sheer mass of them can make perusing them a bit daunting. So, try regrouping them by character, theme, etc. – in whatever way makes sense based on how your story is taking shape. You’ll probably find that after so much time recording ideas, you have enough notes for each selected topic to make at least a small group for each one.

Doing this can actually be transformative. By regrouping the notes, you’re in effect condensing drawn-out series of wandering thought processes into tidy organized clusters. The things you’ll notice and understand by carrying out this task can inspire whole new waves of ideas and deepen your understanding of the story. It might just blow your mind a little bit. And for whatever reason, regrouping physical pieces of paper with your own hands in real life can cement the epiphanies especially deeply in the ol’ monkey brain. Just make sure you were using the super sticky notes, or your newly organized ideas might end up as a mess on the floor.

One other thing that’s great about regrouping the notes is that it doesn’t defeat the wall’s original function of collecting ideas by free-association. You can still add new bits of brilliance after regrouping, but now, most likely, each new idea will have a devoted area to join (and if it doesn’t, simply keep an area of the wall open for notes yet to be classified). New thoughts can join with like kind to enrich, refine, or fruitfully defy those that came before it. 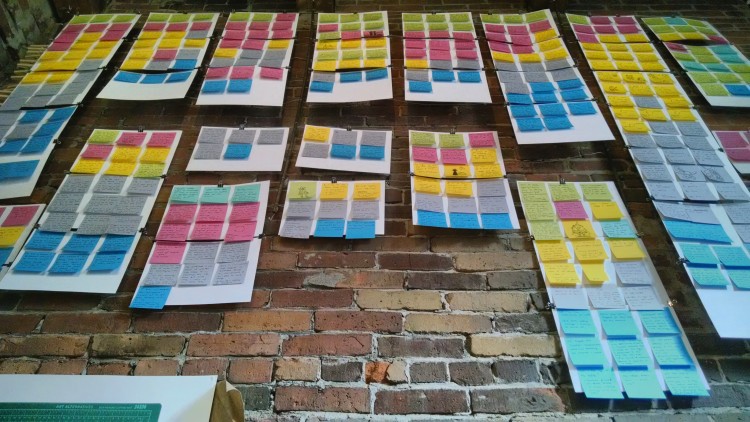 Of course, a sticky notes idea wall is just one of many tools in developing a story, and it’s only one of perhaps innumerable ways to begin generating ideas. What tools or processes do you use to get ideas flowing for a project?

Depending on how useful this write-up proves to be for others, I may get working on more…

This site uses Akismet to reduce spam. Learn how your comment data is processed.